Currently, plasma cutting and laser cutting are used to cut sheet metal. It was created as a substitute for flame cutting in the 1950s, when plasma cutting first became popular. It directs a nozzle’s high-velocity discharge of a superheated, electrically ionized gas (plasma) toward the workpiece. The gas then starts to generate an electrical arc. Some of the gas is ionized by this electrical arc, which results in the formation of an electrically conductive plasma channel. A substantial amount of heat is produced to melt through the workpiece as the energy from the cutter flame travels along this plasma. The plasma and compressed gas blow away the hot, molten metal, which causes the workpiece to separate.

The 1960s saw the invention of laser cutting, initially used to carve holes in diamond dies. The material being cut is burned, melted, vaporized, or blown away during this thermal cutting procedure using a computer-controlled, high-power laser, oxygen, nitrogen, and compressed air. From the laser source, a suitable beamline (made of many mirrors or an optical fiber cable) directs the laser beam into the laser head, which is focused by lenses onto the material’s surface to be cut or pierced.

These applications employ CO2, which operates at a wavelength of 10.6 μm, and solid-state lasers, which use at a wavelength of about 1 μm. (thin disk and fiber lasers). However, CO2 lasers are less expensive because they cannot cut through reflecting materials like copper, brass, and aluminum. Contrarily, solid-state lasers have the key advantage of significantly greater processing speed/feed rates because of the higher absorption rate of ~ 1 μm vs. 10 ~ μm wavelength in ferrous materials and a higher energy/wall-plug efficiency, and a more extensive selection of materials.

Each approach has specific advantages and characteristics that make it more suitable for a given application than the others. The main advantage of plasma cutting is that it enables versatility across different types of metal. The main advantage of laser cutting is that it uses heat rather than contact to cut through the material and is much more exact. There are some significant distinctions between laser and plasma cutting:

Cutting technology: While laser cutters employ a focused beam of light, plasma cutters use a mixture of gases and an electrical arc.

Precision: In plasma cutting, some cutting tasks—such as cutting a saw blade with intricate details—cannot be handled by high-definition plasma cutters. Laser cutters, in contrast, provide a significantly higher level of precision and tolerance.

Capital outlay necessary: Laser cutting is significantly more expensive than plasma cutting, which is quite affordable.

Cutting thickness: Plasma cutters can typically cut through any metal up to 80 mm. As opposed to plasma cutters, which can effectively cut materials up to 25 mm thick, laser cutters often are only able to do so.

Versatility: Plasma cutters can only cut, but they can cut all kinds of metal. Laser cutters can cut through nonmetals, ceramics, and glass and can also engrave, cut, and weld. 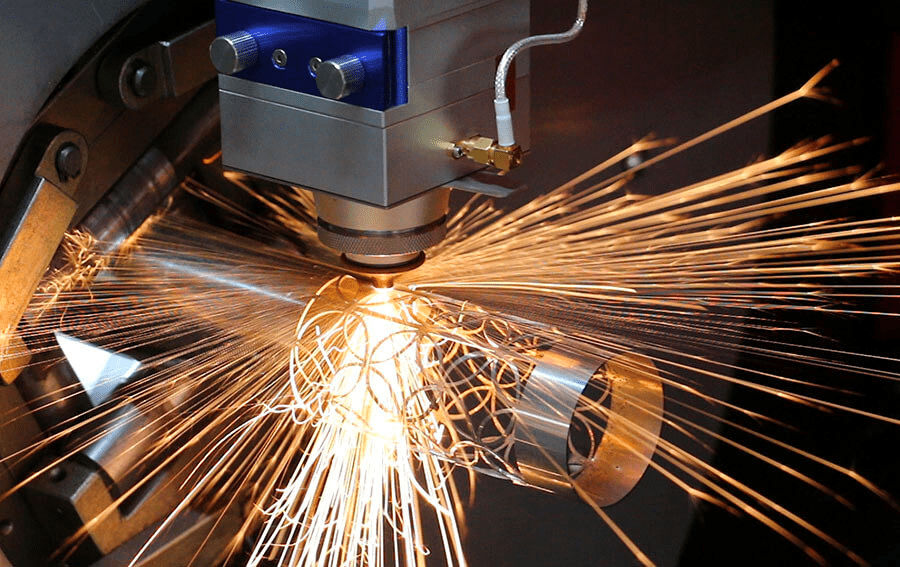 As was mentioned, there are many benefits to laser cutting versus plasma cutting. The first is the variety of materials that can be cut with a laser, including non-metals like plastics, glass, wood, and ceramics, as well as conventional industrial materials like steel, aluminum, stainless steel, and non-ferrous metal sheets. The bundled laser beam only locally heats the material, and the rest of the workpiece experiences little to no thermal stress. This is known as contour freedom. This indicates that the kerf is detailed and barely broader than the beam, allowing for burr-free, smooth cutting of complicated features.

Additionally, laser cutting can create high-quality cutting edges without ejecting melted material by using ultra-short pulses that evaporate the material so quickly that heat influence cannot be felt. This makes the lasers perfect for producing the most complex metal goods, such as cutting chemically hardened glass for the display industry and stents for medical technology.

The early industrial lasers employed single-mode diode pumping and had a releasing output of tens of milliwatts when they initially hit the market in the late 1980s. However, many laser applications require watts of optical power rather than milliwatts. The development of a 4 W erbium-doped fiber laser marked the transition to watt-level fiber-laser output. When 10 W and higher single-mode fiber lasers suitable for micromachining and other applications—the first genuinely high-power fiber lasers—were produced in the 1990s, this development laid the foundation for the golden age of laser cutting development.

More powerful lasers that can cut in huge quantities soon entered the market. Fiber laser cutting entered the commercial sector at the beginning of the twenty-first century. Aluminum, brass, copper, and galvanized steel could all be sliced thanks to the first fiber lasers for cutting reflective metals launched in 2008. Other metals may also be cut using various laser beam conveyance techniques.

The market for laser cutting equipment was valued at US$4.3 billion globally in 2020 and was anticipated to increase by 8% CAGR to US$7.3 billion by 2027. 1 The primary market drivers discovered included the rising demand for highly effective and precise technology capable of producing smooth finishing, along with the need for high processing speeds and simple programming technology from various manufacturing sectors, including defense, consumer electronics, and automotive.

The availability of super high-power fiber sources has significantly improved laser cutting technology and the competitive positioning of lasers versus mechanical cutting and plasma, according to Martino Burlamacchi, president of the Italian company Cutlite Penta, a developer and manufacturer of both fiber and CO2 laser systems. Since 2021, Cutlite Penta has deployed over 250 20 kW or more laser cutting equipment. The laser is now quicker, more affordable, more accurate, more efficient, and sustainable than competing technologies. Laser cutting speeds on 20- to 50-mm-thick materials are currently up to 3X faster than plasma.

High-power laser cutting has gained access to new markets, such as steel buildings, ships, and construction equipment. According to Martino, the replacement of plasma by laser technology is paving the way for a sustainable revolution in which expenditures on materials and electricity are expected to result in continual reductions in CO2 emissions.

The power of fiber lasers is growing in the present laser-cutting market, which has significantly improved the adaptability and productivity of laser-cutting technology and given lasers a competitive advantage over mechanical cutting and plasma.

Contact us for all your fully automated cutting needs. We look forward to discussing your requirements and proposing the right solution that will work for you.

We can provide you with a solution that will offer superb cutting, together with significant operational improvements that will meet or exceed all of the requirements of your production needs.